Appearance of the large bow-shaped feature observed by Akatsuki turned out to be a mysterious phenomenon occurring every Venusian dayDec 23, 2017

In December 2015, soon after the success of Venus Orbit Insertion, Venus Climate Orbiter AKATSUKI with the Long-wave infrared camera (LIR) and the Ultraviolet Imager discovered a large bow-shaped feature spreading over ~10,000 km in a meridional direction above the cloud top (at ~70 km altitudes) without being blew away by the fast background wind of 100 m/s. The origin of the large bow-shaped feature is expected to be a small atmospheric perturbation at the surface topography of Venus (Aphrodite Terra), which is 70 km below the structure, and this discovery gathered wide interest from researchers which may change the traditional common sense of Venusian meteorology.

Interestingly, no bow-shaped feature was confirmed when the same region above Aphrodite Terra was observed in January 2016, suggesting that a bow-shaped feature does not exist continuously. The bow-shaped feature could appear only when a certain condition is fulfilled. For clarifying such condition, in this research, we investigated Venus images obtained by LIR for more than 2 years in detail.

First, it turned out, surprisingly, that the occurrence of a large bow-shaped feature discovered by AKATSUKI for the first time was not a rare event, but such features appeared one after another (once per every 2-3 months) above several Venusian mountains in the low latitudes including Aphrodite Terra. Moreover, once such a feature appeared, it existed for about 1 month.

A large number of bow-shaped features were found especially above the four high mountains (Fig. 1), and from a sequence of images obtained by LIR, all of them were confirmed to be stationary phenomena (did not change the position with respect to the surface, see Fig. 2). 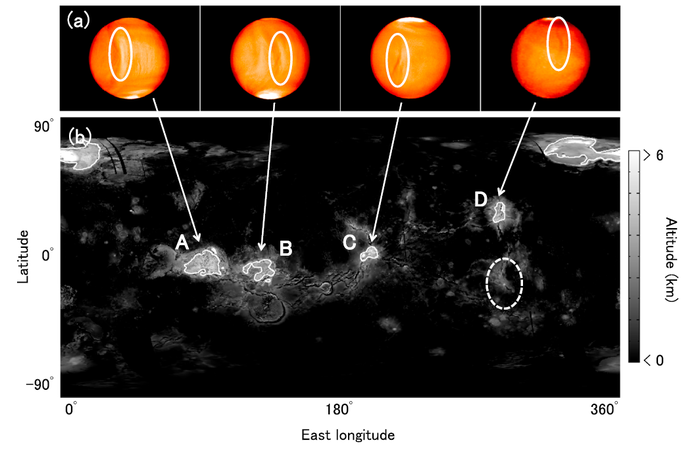 Fig. 1: (a) Bow-shaped features on Venus seen in LIR images and (b) their topographic locations. The white contour lines indicate altitude of 3 km (from Kouyama et al. 2017). 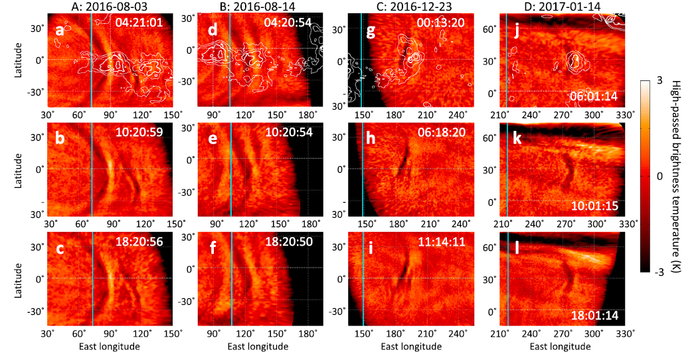 Fig. 2: Sequential LIR images of observing bow-shaped features in each region. The fast background wind (100 m/s) can move ~40 degrees toward west for 12 hours, while stationary features did not change the position (from Kouyama et al. 2017).

Next, we investigated the local time of the occurrence of bow-shaped feature in each region and we found that such a feature appears significantly every when its local time position is approaching local evening. This means that, seen from the Venusian surface, a bow-shaped feature appears in the sky everyday around the evening (here, "everyday" means solar day for Venus = 116.75 earth-day). While many diurnal phenomena such as land and sea breeze are well known on the earth, this is the first discovery of a "daily" phenomenon on Venus.

Considering these observational facts, we can deduce that the "Smiley Venus" observed on September 13, 2017 was due to a combination of stationary features above high mountains, and it is expected to occur every Venusian evening. We can't wait for the next occurrence!

From a theoretical study, it is expected that a bow-shaped feature is formed by an "atmospheric gravity wave" traveling from the Venusian surface level to the cloud top level. It is also known that such gravity waves can transfer atmospheric energy and affect the wind speeds. Particularly, a stationary wave such as the bow-shaped feature can contribute to decelerate the super-rotation. Since it occurs regularly, it may be an important part of exchanging atmospheric energy in Venusian atmosphere.

Though a mechanism of exciting stationary waves in the lower atmosphere has been still unresolved, our results assert that the stationary wave should be taken into the study of Venusian atmosphere.

These research results are reported in Kouyama et al. "Topographical and Local Time Dependence of Large Stationary Gravity Waves Observed at the Cloud Top of Venus" and appear in the Dec 2017 edition of Geophysical Research Letters.